And we can offer products according your requirement.

High yield of coke in RFCC unit may lead to several problems, such as the yield of high value products will drop, increase of regeneration temperature will accelerate the hydrothermal deactivation of catalyst, and overload of regenerative catalyst cooler will reduce the feed quantity of raw material. Hence, refiners and catalyst makers have always attached great importance to coke yield.

In general, four types of deposited coke are identified in FCC Catalysts: (1) Catalytic coke – from condensation and dehydrogenation in catalytic cracking reactions. (2) Catalyst-to-oil coke – hydrocarbons entrained in catalyst pores and not removed by the stripper. (3) Contaminant coke – from dehydrogenation and condensation catalyzed by contaminant metal. (4) Additive coke — from unconverted heavy molecules (including residual carbon and the precursor of coke like polycyclic aromatic hydrocarbons) already presented in the feed. Besides the feed and design of units, all these types of coke formation are closely related to the nature of catalyst.  For example, active matrix material is added in RFCC catalyst to enhance heavy oil conversion. However, non-selective reactions on this matrix, such as dehydrogenation and condensation, will increase dry gas and coke yield.

Our company based on its own proprietary DYC Technology Platform, has developed DYC-LC series catalysts with lower coke and slurry yield through intensive effort on studying structure-activity relationship of FCC catalyst.

Taking M100 as a representative catalytic cracking feedstock, performance of DYC-LC and domestic competitive catalyst was tested on ACE fixed fluidized bed introduced from America. Because the results from ACE are very similar to the industrial application results, product distribution of ACE results can be used as a selection agent reference. The feedstock properties and tested results are shown in Table 2 and Table 3.

As shown in table 2, the M100 feedstock contains low hydrogen and saturated hydrocarbons, high aromatics and resins, high contaminant metals and basic nitrogen, and is a feedstock which is hard to crack.

Table 3 shows that under the same reaction conditions, compared with competitive FCC catalyst, heavy oil conversion for DYC-LC catalyst is 0.87% higher, coke yield is 1.52% lower, gasoline+LCO yield and LPG+gasoline+LCO yield is 1.34% and 2.22% higher respectively, while bottoms yield is 0.51% lower. The results show clearly that DYC-LC catalyst has better performance on both coke selectivity and bottoms cracking.

Based on the results above, the following observations can be made: DYC-LC catalyst combines not only lower coke selectivity but also higher heavy oil conversion. 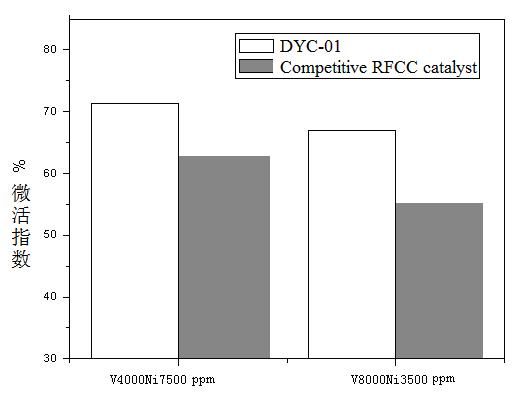 The catalytic performance evaluation of DYC-01 catalyst was carried out with M100 feed in ACE catalytic cracking testing unit. Results are listed in Table 2.

Table 2 shows that under the same reaction conditions, compared with competitive RFCC catalyst, heavy oil conversion for DYC-01 catalyst was higher by 2.09%, gasoline+LCO yield and LPG+gasoline+LCO Yield is higher by 1.24% and 2.05%, respectively, meanwhile, coke yield remains the same, bottoms yield decreases by 1.60%. The results fully show that DYC-01 catalyst has better performance on both resid cracking and contaminant metals tolerance.

Based on these results, the following observations can be made: DYC-01 catalyst combines good physical-chemical properties with high cracking conversion potential of resid containing high levels of metals and basic nitrogen. We believe that the application of DYC-01 catalyst will definitely enhance economic potential of RFCC unit.

I. Physical and Chemical Properties 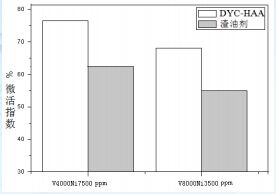 Figure 1 shows that as the content of metallic nickel and vanadium increases to a certain extent, the activity of competitive RFCC catalyst decreases sharply, while the DYC-HAA with special pore structure and high rare earth content has excellent performance in metal contamination resistance, and slow activity decay.

The catalytic performance of DYC-HAA is evaluated with small fixed ACE unit. The results of DYC-HAA with content of 20wt% in RFCC agent on sale are listed in Table 3.

（1）Activity increases, and conversion rate is higher by 2.76wt%;
（2）Cracking ability of bottoms improves, and yield of bottoms is lower by 2.16wt%;
（3）Gasoline+ LCO yield increases by 1.51, LPG+gasoline+LCO yield 2.13wt%, generally from the cracked bottoms;
（4）The selectivity of green coke and gas is good, and the yield of dry gas and coke remains the same under large increase of light oil yield and total liquid yield.

If you have any inquiry for FCC catalyst and FCC additive please email us : y@yzeolite.com